When Jesus talks about "lifting up a stake" he destroying that established position.  The word translated in Mark 8:34 and Mark 10:21 as "take up," is (ἀράτω) airo, which is often used by Jesus to mean "remove" and is frequently translated that way in the Gospels. Notice how badly the meaning of "remove your cross" works and how well "remove a stake" works.  It doesn't make any difference if we are talking about destroying the integrity of the wall, the fence, or the boundary. Lifting or removing a stake destroys the established position, the comfortable place we claim. The use of airo is also problematic with a torture stake since it means both "lifting it"  to carry it and "raising it" to plant it in the ground.

In Matthew 10:38, the word translated as "taketh" is lambano (αμβάνει)   to "take," "take hold of," "grasp," The imaged here is the "stake" as a "pole" or walking stick. Of course, taking a walking stick to follow someone makes perfect sense alone. It implies that the journey will be long. However, among nomadic people who use simple tents when traveling, the idea of pulling up the central pole and a walking stick are connected. Tents have one central pole that is used as a walking stick when moving, You can see this among the Masai today. This concept flows naturally from the idea of following someone, especially in ancient where so many lived as nomads, shepherds, and traveled the crossroads  Again, the idea of "lifting up" the stakes or poles on which the Romans hung criminals would not come to mind at all in thinking of following someone except after Jesus's death, when we know how he died.

Finally, we have the word in Luke 14:27, which is translated as "bear." This is  (βαστάζει) bastazo, which means "to lift up," "to raise," "to bear," "to carry," "to endure," and "to carry off, "produce," "yield," of land." Notice that the "bear" here means "produce" and "yield" as well as "carry." However, the primary meaning is "lift up" and the word also means "carry off." Again, none of these ideas are easily applied to the instrument of death. Though Jesus carried the cross, criminals were frequently hung on crosses others carried and planted

So, where did the form of the cross, an upright pole with a crossbar, come from. The early symbols (2nd century) of Christ were a dove, a fish, a ship, a lyre, and an anchor. The Greek letter chi, which looks like the letter X is the first letter of the Greek word from Christ, χριστός. We see early uses of the various Christ symbols with the "X," two fish forming an "X," or the anchor, with its crossbar leaning into an "X. 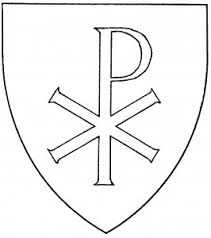